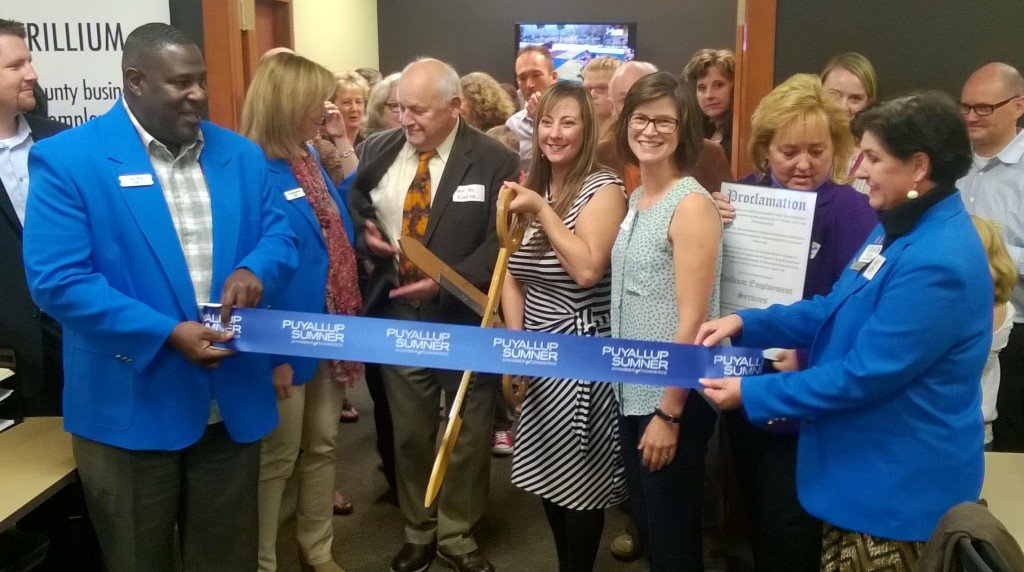 Trillium had quite an October, celebrating 2015’s National Disability Employment Awareness Month. Over a dozen businesses who partner with Trillium were publicly recognized. A ribbon cutting ceremony was held for our new Pierce County office. Trillium was highlighted in four newspaper articles, one in each county we serve. Famed Executive Director Trish Borden announced her retirement and successor. Three new employment consultants were added to the team. It was a busy month.

Every year Trillium seeks to recognize employers who work with us that go above and beyond the call of duty with regards to inclusive employment. We nominate businesses for awards sponsored by regional organizations in addition to our own local awards. We were thrilled to see four of our employers were winners of the regional awards. Hop Jack’s, a locally-owned restaurant chain, was given the Governor’s 2015 Large Private Employer of the Year award for their work in fostering an inclusive workforce and advocating on its benefits.  The City of Auburn won the Public Sector employer of the year with the Community Employment Alliance. At a celebration event held in Clark County, Ryonet Corporation was named the Innovative Employer of the Year, and PeaceHealth was chosen as the Employer of the Year.

Trillium produced their own award for businesses in King, Kitsap and Pierce counties: Excellence in Employment 2015. This year’s theme was to celebrate the businesses that had a record of consistently maintaining an inclusive workforce. In King County, Trapper’s Sushi, Azteca Mexican Restaurants, and Taco Time Restaurants were given the award. Out of Kitsap County Jimmy John’s, Fred Meyer, South Kitsap School District and Port Orchard Elementary School were honored. The team in Pierce County selected Applebee’s, McDonald’s, Comprehensive Life Resource Center, MOD Pizza, and Ikea Distribution Center. Each of award winners were presented with a plaque during an award ceremony located at one of each of their respective locations.

On October 27, Trillium hosted an open house and ribbon cutting ceremony at our new Pierce County office in Puyallup. The office was packed with dozens of people including clients and their families, public officials, partnering agencies, the Puyallup school district, and other members of the business community. The President and CEO of the Puyallup/Sumner Chamber of Commerce oversaw the ribbon cutting ceremony, and the Mayor of Puyallup participated as well. Though the office has been operational since the spring, the ribbon cutting was an important step in solidifying our brick and mortar presence in the community. The Pierce team has been serving businesses and job-seekers in Pierce County for 10 years so it was prepared for a local office.

Several newspaper articles gave a great spotlight to local employers that have hired employees with disabilities. Trillium loves the recognition they receive for creating an inclusive workforce!

Trish Borden, Trillium’s renowned Executive Director of 29 years, formally announced her retirement at the end of 2015. In the letter she expressed her appreciation for the Trillium staff and the opportunity she has had working in this important field. She also remarked on the growth Trillium has experienced under her leadership, stating that when she started there were all of three staff members and one office; there are now over 50 staff members working out of four offices. Of the experience she says, “I have gained so much wisdom through this work and my life has been rich with knowing that we are making and will continue to make an impact.” Her efforts will be remembered fondly by staff and the community for which she dedicated her career. Also in the letter, Trish announced that she will be succeeded by Karen Williams, who is currently serving as Trillium’s Assistant Director.

Trillium’s Team continues to grow. Three new employment consultants joined the team, one for each of the Kitsap, King and Pierce offices. The Kitsap County team welcomed Katie Burtoft, the 13th member of that group. Olivia Pomata, once a part-time Job Coach, has now been added to the ranks of her fellow Employment Consultants in King County. The King County office now sits at 24 employees. Makynlie Jeffers joined the Pierce County team, bringing that office’s current roster to 11. These additions follow two other hires earlier in the year, Jay Hamann as Trillium’s new Communications Coordinator and Laura Stewart as an Employment Consultant in Clark County.

It was certainly an exciting October, and we thank you for your continued support in promoting inclusive community and employment opportunities.